What does migration to the EU look like in 2030? How do different scenarios impact international migration flows? How likely are various migration scenarios  according to experts? The pages below present results from a Delphi survey with 178 migration experts. Explore the tabs below in consecutive order to learn more about the project.

There is an increasing policy interest across the EU to better plan and prepare for future migration flows. This interest is reflected in a growing number of reports that use expert knowledge to foresee future migration trends and develop migration scenarios (Sohst et al., 2020). In this exploratory study, the International Organisation for Migration’s Global Migration Data Analysis Centre (GMDAC) and the Netherlands Interdisciplinary Demographic Institute (NIDI) combine two separate methodological approaches - migration scenarios and a Delphi expert survey - to examine the potential and limitations of using expert opinion to better plan and proactively manage future migration.

By combining migration scenarios and a Delphi expert survey, the study reveals the breadth of possible trajectories of immigration to the European Union in 2030, the uncertainty involved in anticipating future migration and the relative impact of various migration determinants. 178 migration experts participated in the survey. Data was collected from October 2019 to January 2020. You can find the full report and the survey questionnaire in the links below.

To get the best understanding of the project results, we recommend to explore the tabs on this page in consecutive order. The tab 'Migration scenarios' shows four plausible scenarios for the world in 2030 developed for the survey and the key factors affecting future migration. In the tab 'Key results' you will find some of the most relevant results of the project. Finally, you can play with the data yourself in the 'Explore the data' tab.

Four future scenarios for the EU in 2030

The pilot study did not develop new migration scenarios for Europe. Instead, scenarios were synthesized based on common features of scenarios that have been developed in the past.

Typically, migration scenario studies identify the most impactful and uncertain factors that will affect migration in the future. The interaction of these variables is used as a  basis to develop the scenario narratives. For more information about the methodology used in this study, consult the full report (link at the bottom of the tab 'About').

For this pilot study, the factors that will affect the future of European immigration in 2030 are the economic development gap (economic convergence vs. economic divergence) and the degree of international cooperation (multilateralism vs. unilateralism) between the EU and the main sending regions. The interaction of the variables produces four scenarios: 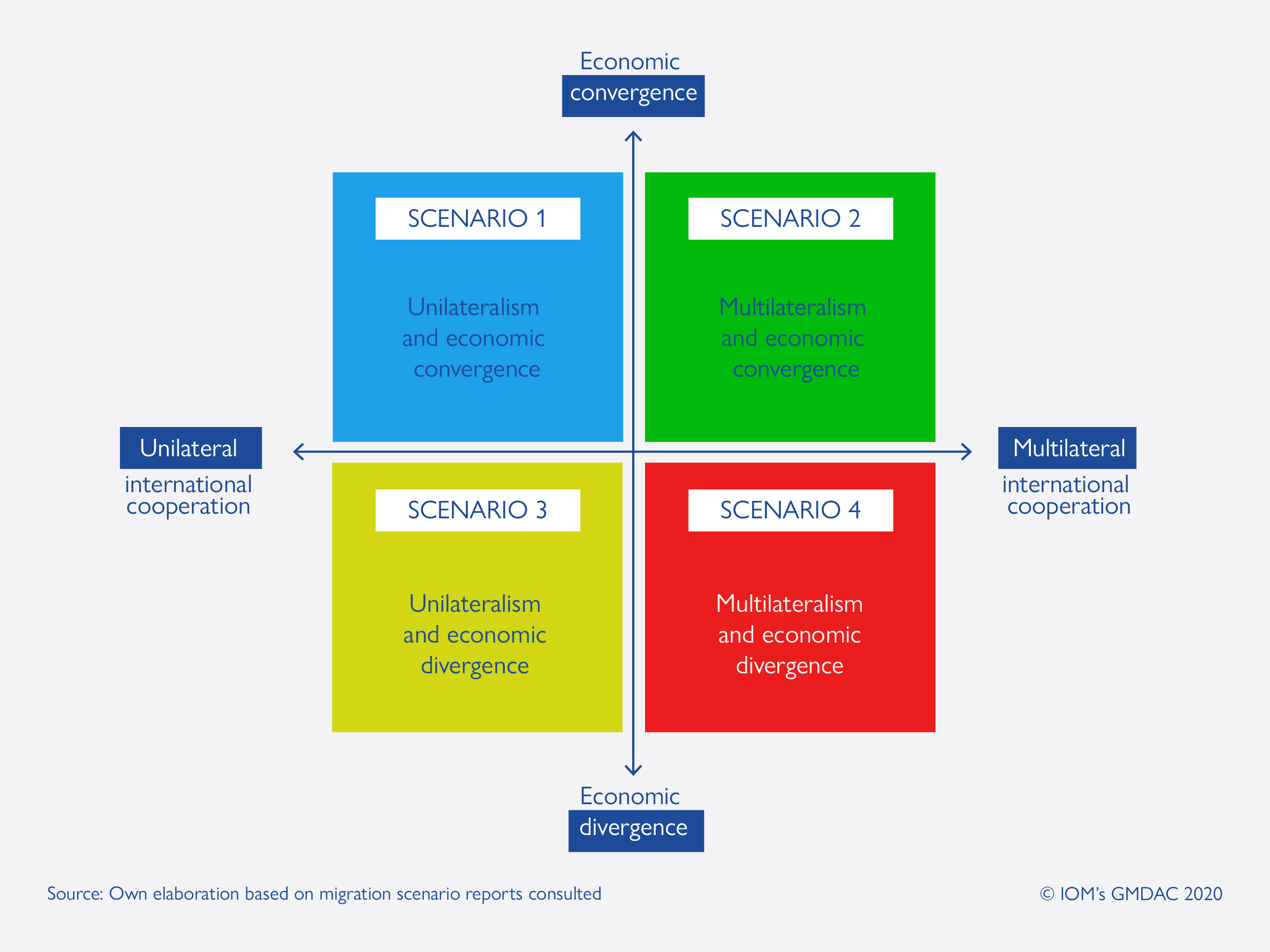 Scenario 1 describes the world in 2030 in which international cooperation has been reduced to mostly one-sided action. Protectionism is on the rise. Asia and Africa have caught up with Europe economically. Increasing wealth inequality poses a challenge to African, Latin-American and Asian countries.

Scenario 3 paints a gloomy picture for international cooperation. Cooperation is at its lowest and persisting and large economic gaps have emerged between the EU, Africa, Latin America and Asia. Social inequalities are on the rise, causing social unrest.

In 2030, an economic crisis in Africa, Latin America and Asia creates patches of instability. To deal with the economic instability in sending regions, the European Union, African, Latin American and Asian countries engage in multilateral cooperation that allows for some progress in the management of migrant flows.

Which of the scenarios is deemed most likely by migration experts?

Experts disagree on which of the four scenarios is most likely to materialize in 2030. A future in which world regions grow economically more similar but countries act increasingly unilaterally (instead of using mechanisms of international cooperation) is considered the relatively most likely scenario. In contrast, a future in which world regions grow more economically similar while also increasing their international cooperation is considered least likely. If the four scenarios were equally likely to occur each would have a 25 per cent chance, as marked by the dotted line in the figure. 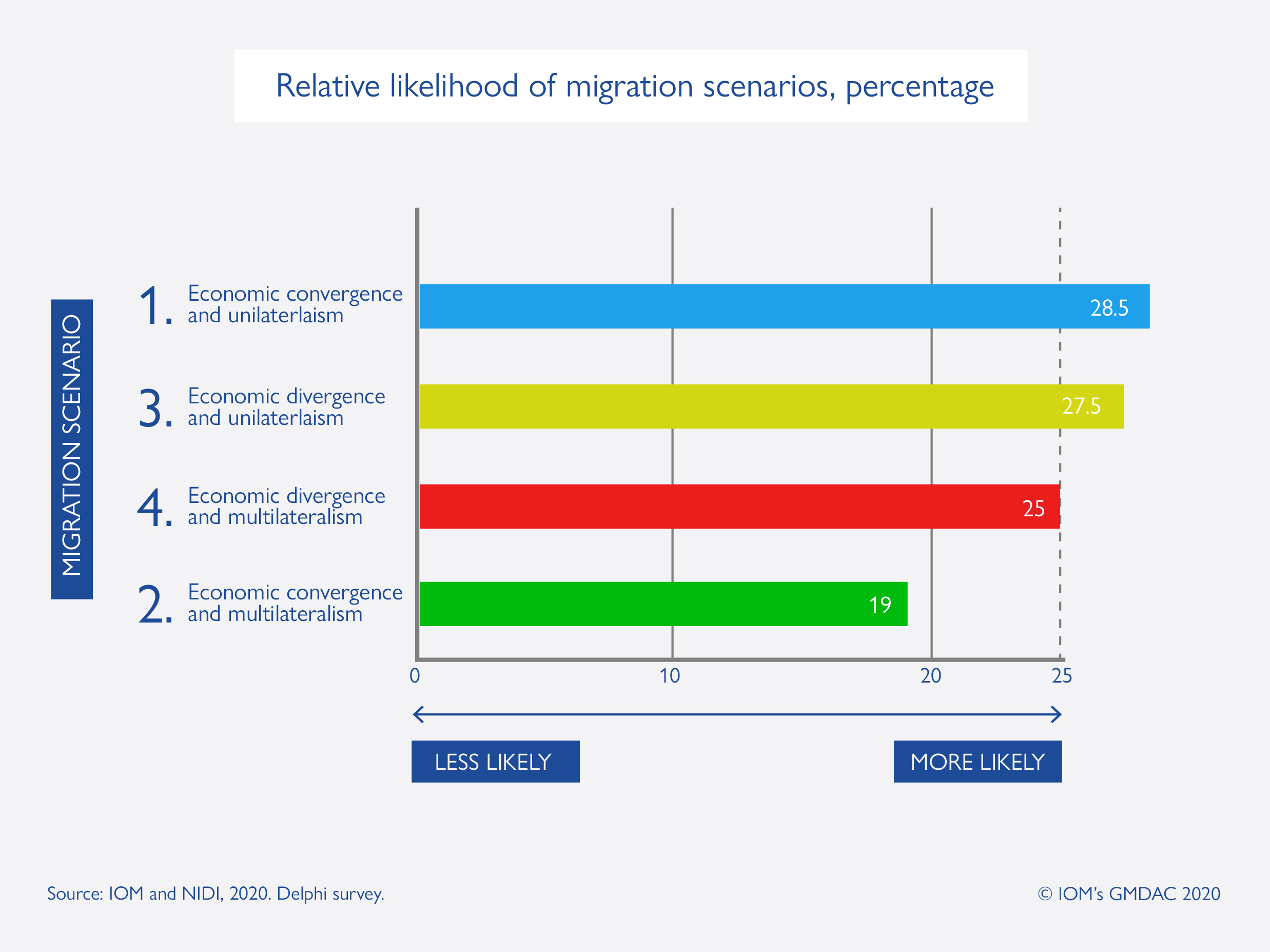 How will each scenario affect total immigration flows to the European Union in 2030? 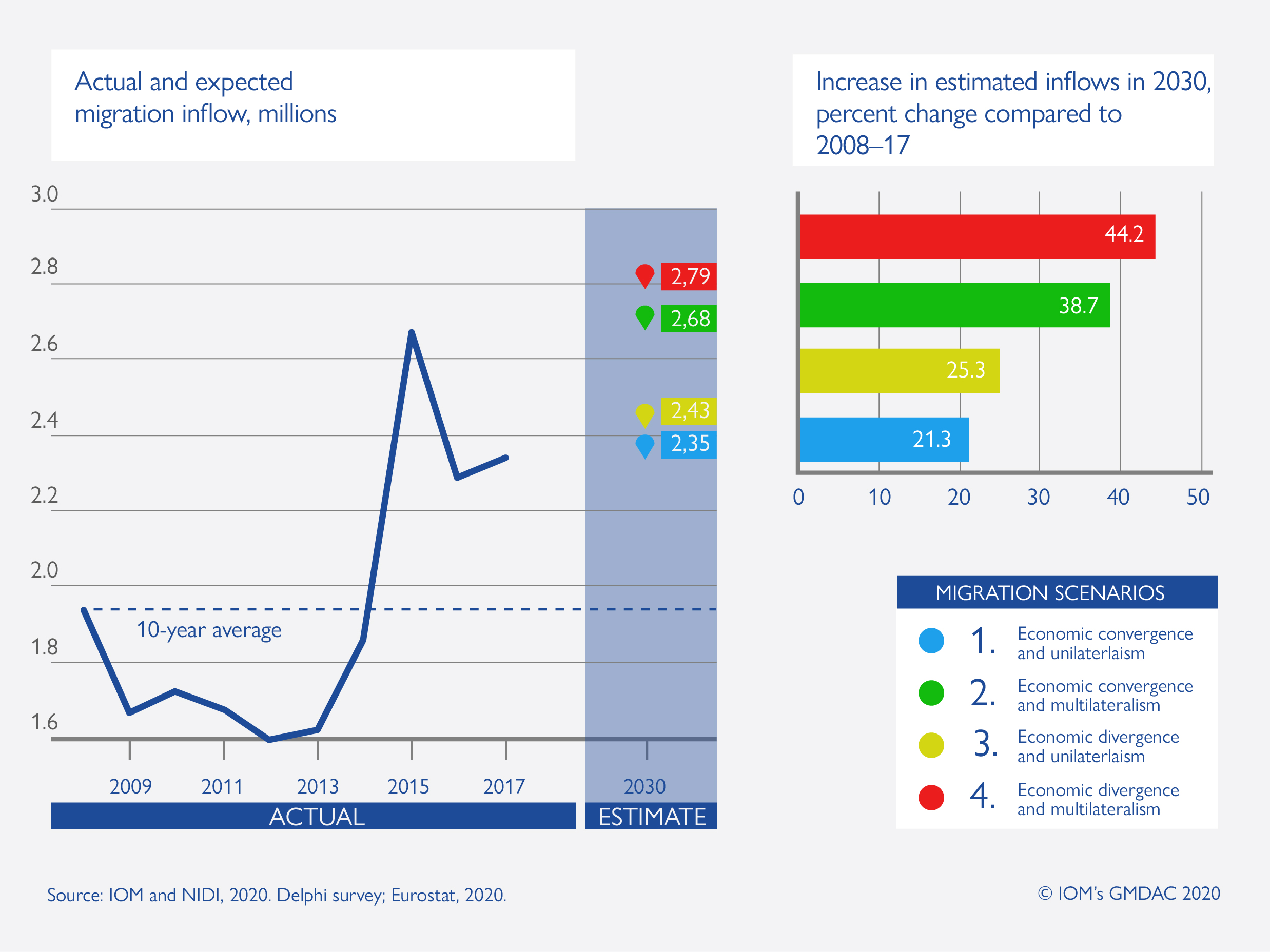 Explore the data by scenario. Just follow these steps:

Bringing migration research under one roof.

Funded by Led by

This project was made possible thanks to funding from the European Union’s Horizon 2020 research and innovation programme under grant agreement Ares(2017) 5627812-77012.